What Past Google Algorithm Updates Can Tell Us About Search Today Google is constantly looking to improve its flagship product, Google Search. Since its launch in 1998 to its rise as a global technology leader through the early 2000s, Google has shifted the way we find information. By creating a tool that allows us to find the answers to nearly any question within seconds, they have empowered humanity like nothing ever created before. To ensure that they produce the most organic results possible while also delivering a great user-experience, Google continually updates its algorithm. In this post, we are going to look back at the major updates Google has implemented since 2000 and what those changes can tell us about search today.

It’s fairly common knowledge in the search community that Google makes anywhere between 500 to 600 updates each year. While many of these are smaller adjustments and tweaks, each year we are faced with a number of major updates to the algorithm and it’s our goal as SEOs to learn what the new expectations are and how we can optimize our sites to meet Google's new requirements.

It’s important to note here that SEO is not about “outsmarting” the system. Good SEOs follow the guidelines and work to improve the quality of search. It’s our goal to help our clients create connections with users searching Google for answers to their questions. As you’ll see in the analysis, Google is on a mission to deliver the best results to their users and they reward sites that help them achieve this goal.

For this post, I pulled the list of updates from Moz’s extensive list of Google Updates. (See that full list here.) Here is the breakdown of the data I pulled and the segments I used.

Major Updates Over the Years

Using the list provided by the Moz page, there have been a total of 154 major algorithm dates since 2000. Not all of these fluctuations in search were confirmed, but a majority were. 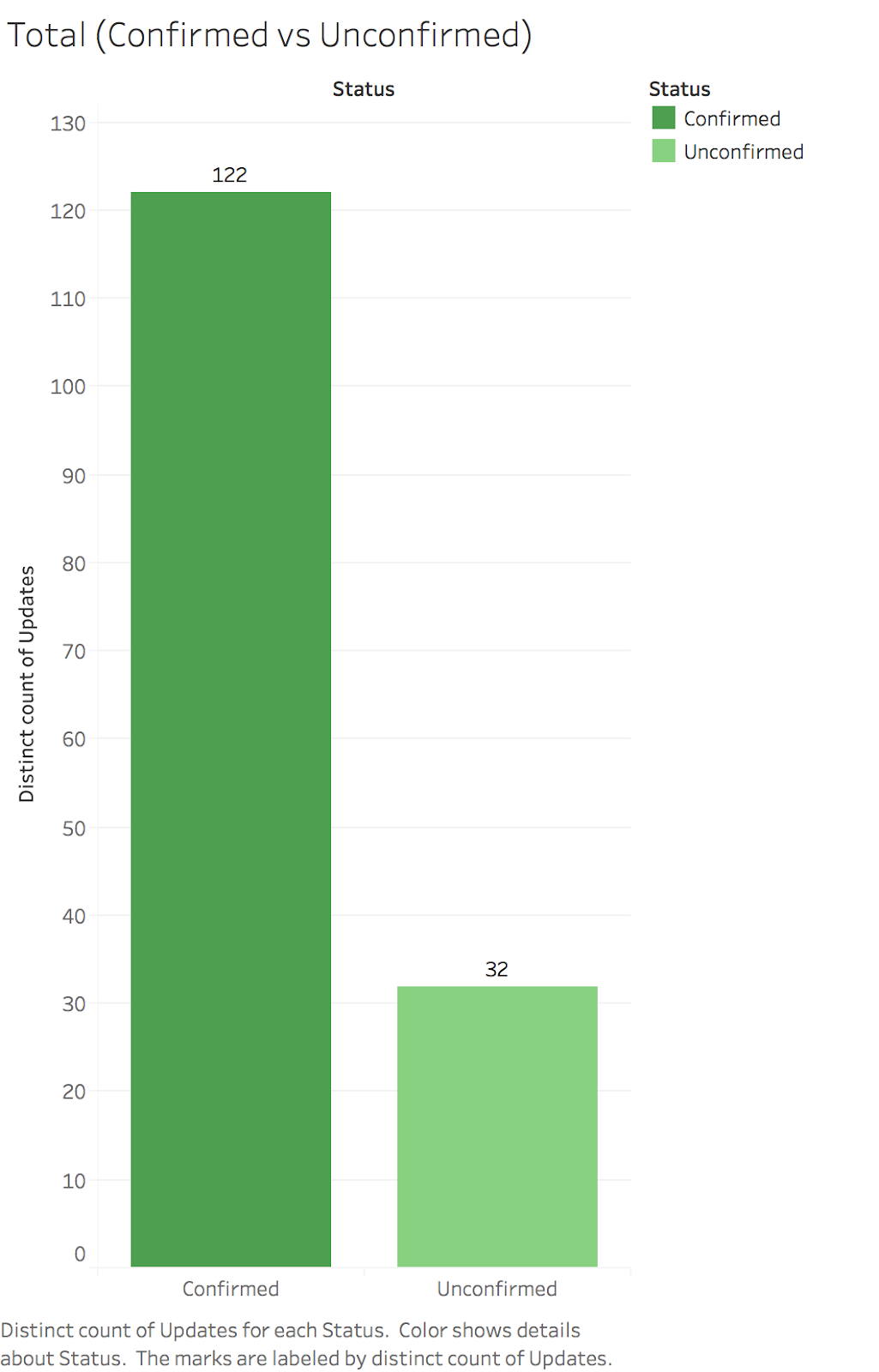 While the average major update per year comes out to about 8.5, as you can see from the graph below, some years are much more active than others. 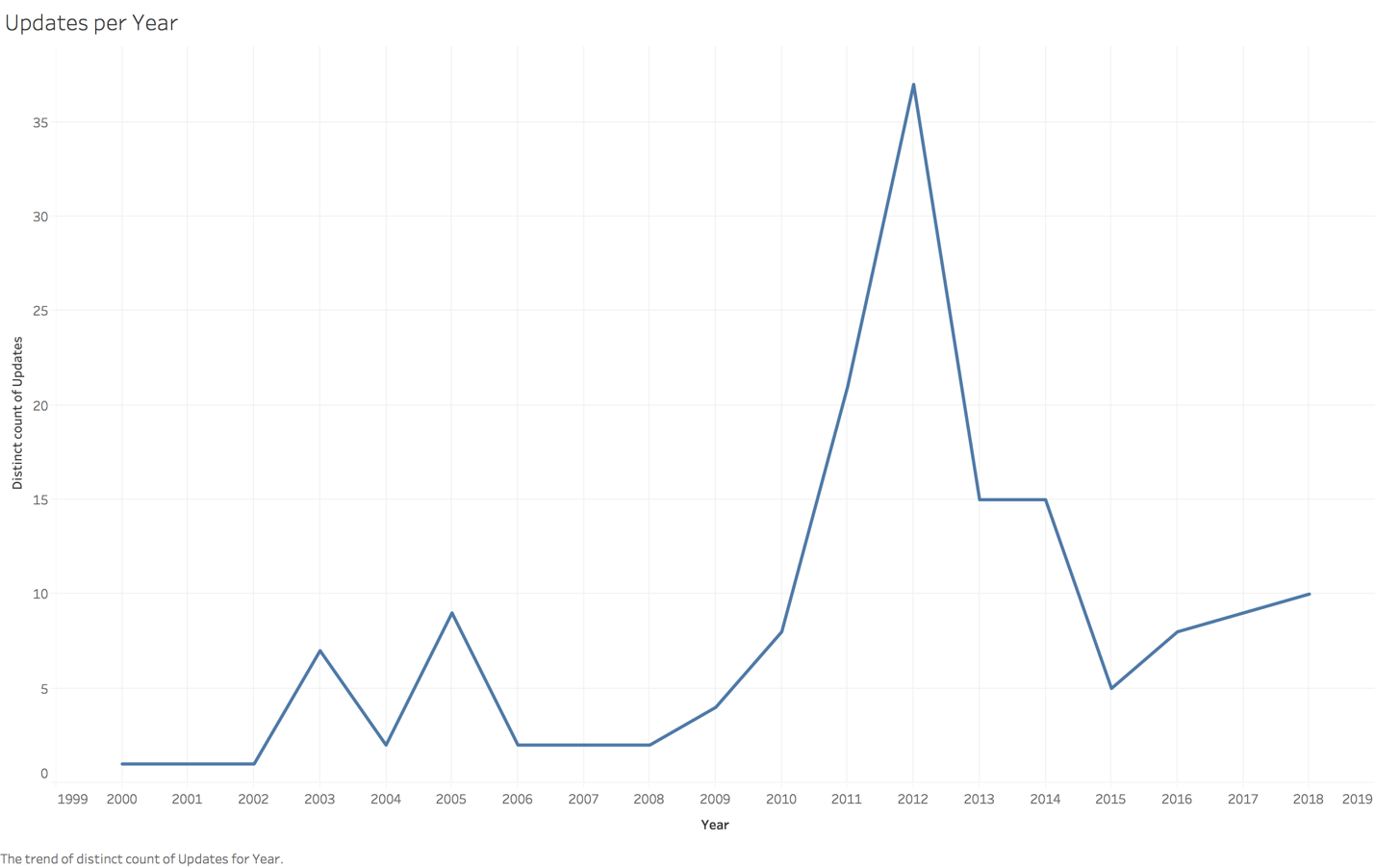 Starting in the year 2010, we begin to see a large spike in ranking fluctuations. From 2000 to 2009 there was an average of about 3.3 major updates year or a total of 30. 2012 was an extremely active year with 37 significant changes. Since then, we’ve experienced a much more active Google.

While the number of major updates has increased significantly over the past 9 years, transparency has fluctuated quite a bit. Some years, like the very active 2012, Google confirmed over 90% of the updates. But, in 2017, a year in which we saw 10 major updates, they only confirmed 50% of them. 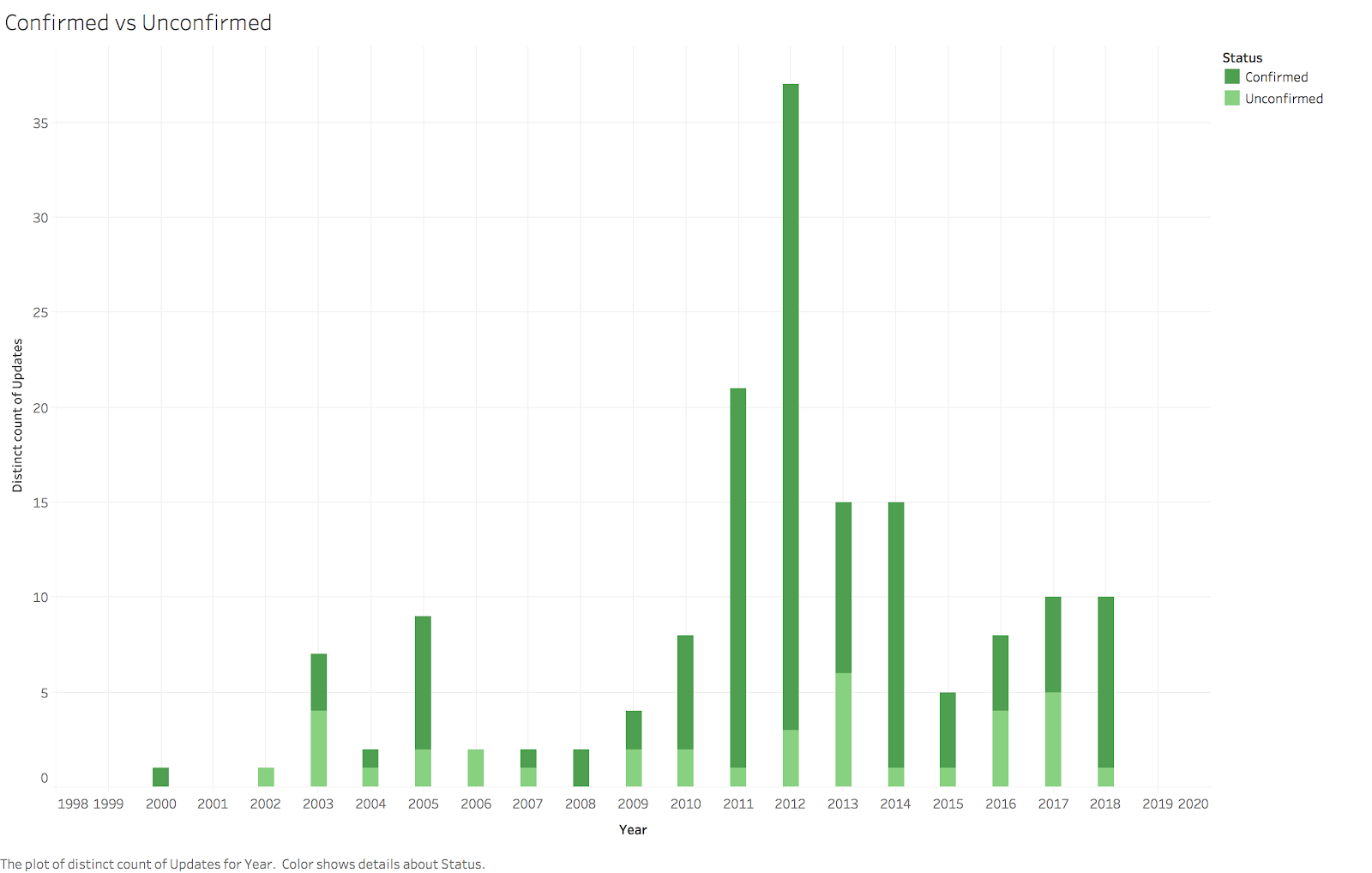 In their more active years, Google does tend to be more transparent. There are also a number of SEOs who have done a great job of getting details from Googler’s via Twitter. Sites like https://www.seroundtable.com/ are a great resource for SEOs looking to understand shifts in the algorithm.

Even when an update is confirmed, it doesn’t mean we know everything that is going on. Most of the time, Google confirms a change was made and may give a bit of context if warranted, such as the Medic update in which they confirmed it focused on the healthcare industry.

Improving Search for All

The goal behind the algorithm updates is to improve the quality of search for all. Over the years, different challenges, link spammers, backlinks and poor quality, has pushed Google to change their algorithm to ensure they deliver the best results in the fewest amount of searches. Below is a chart that breaks up the type of updates by category. 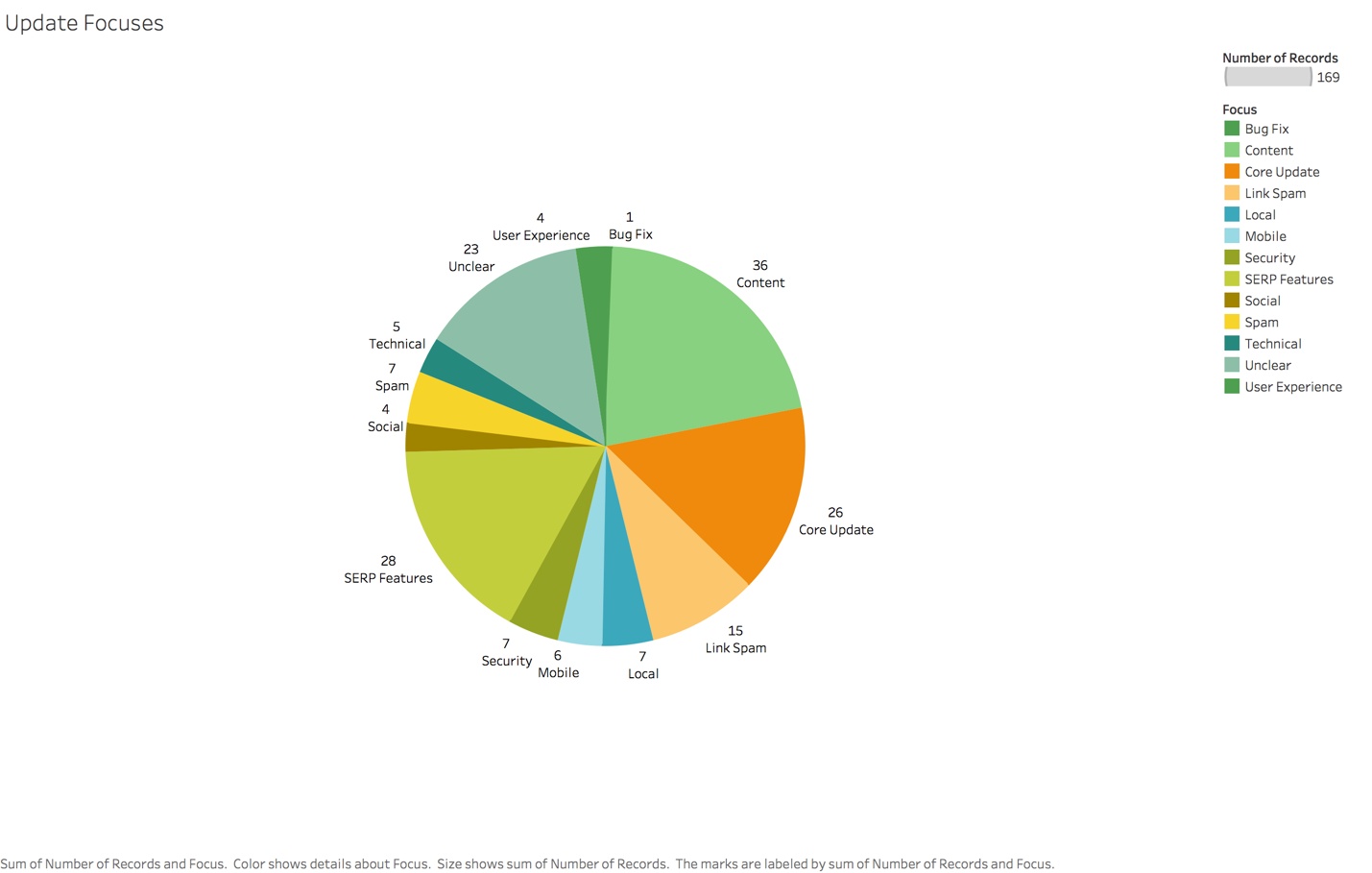 The three biggest focuses have been Content, SERP Features and Core Updates. Close behind is link spam and of course, the many updates that where we are unclear. As you will see in the graph below, as the internet has grown and the importance of search has along with it, Google has had to shift its focus to meet these new challenges. 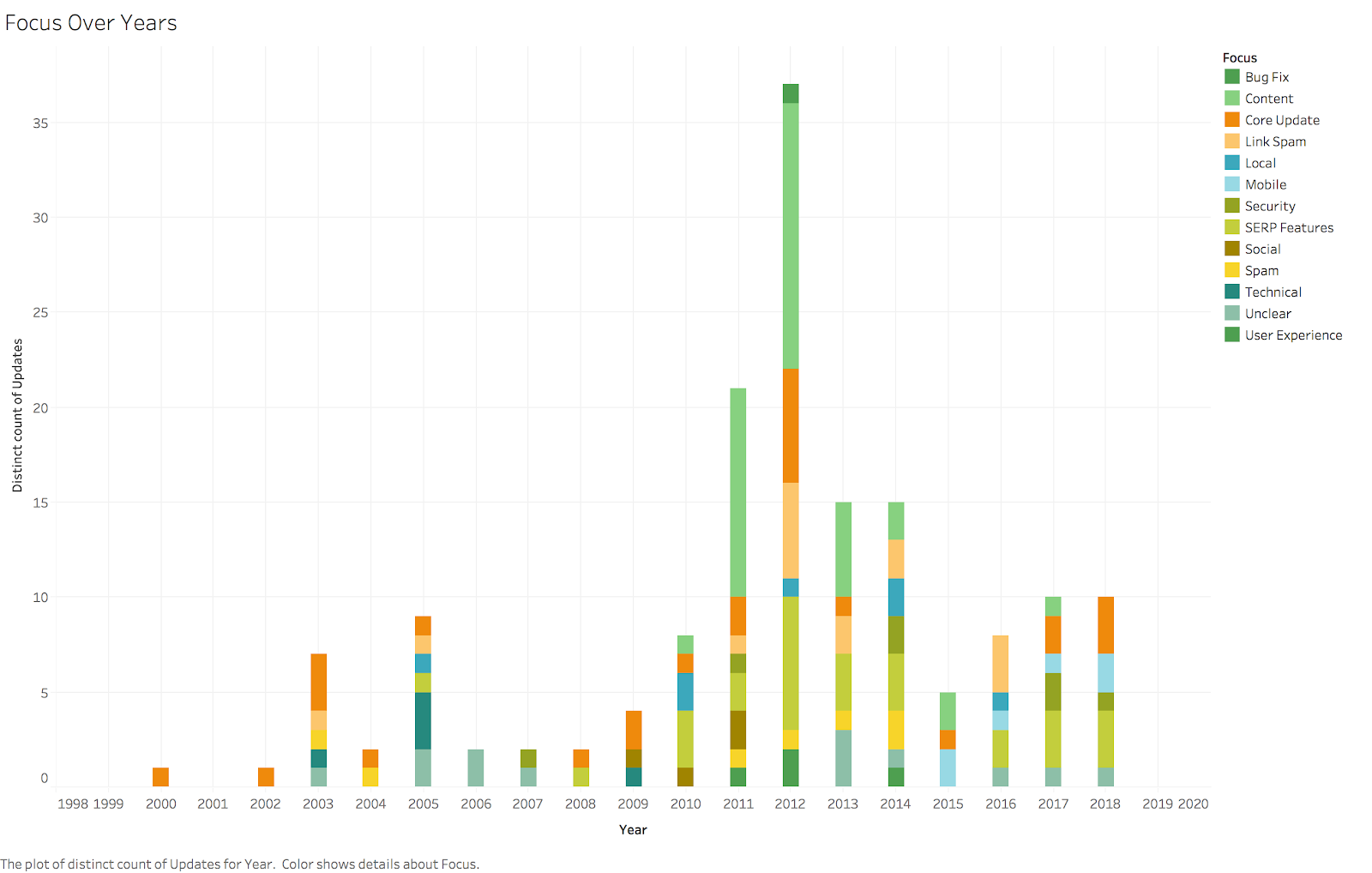 In the early stages of Google, many of the algorithm updates focused on Core updates, technical and spam fighting. As the years go on, you see a huge rise in the focus of both Content and Link Spam (Panda and Penguin).

Starting in 2015, you also begin to see the shift towards mobile. This is a trend that is highly likely to continue to increase, especially with the increased use of mobile and voice search and the divided index.

Looking Towards the Future

At the time of writing this, we have already had 10 major algorithm updates. We’ve already hit the total amount for all of 2017. This summer, in particular, has been very active. Check out some of the graphs from popular tracking sites.

If there is one thing that you take away from this post, let it be this, Google is always changing. And for the most part, changing for the better. Digital marketers and SEOs need to pay attention to shifts that are made so they can learn how to better optimize for the future. Let’s look at the last two years of updates. 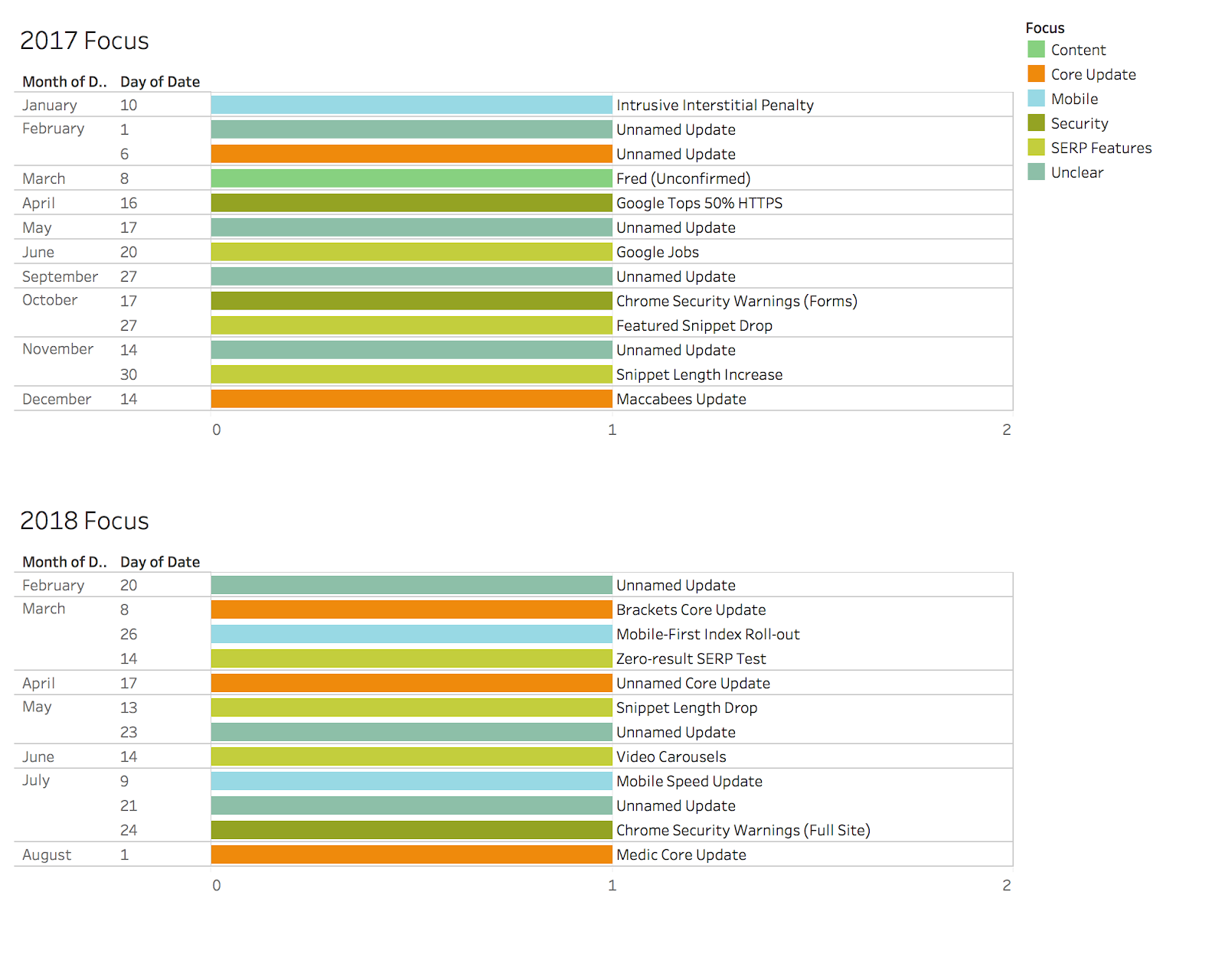 In 2017, we saw 3 updates to SERP features, 3 that were “unclear,” 2 focused on security, 2 Core Updates, 1 Mobile updates and 1 focused on content. Many of the SERP features were focused on Schema and adding new options to the SERPs.

This year, we’ve seen 3 updates to SERP features, 3 that were “unclear,” 3 Core Updates, 2 focused on Mobile and one around security.

So what can we learn from this?

Well for starters, mobile is important. In this year alone we saw the mobile-first index go live as well as the mobile speed update. If you want to rank, you need to think mobile! (Especially in the B2C Market.)

Second, we can see that Google is doing a lot of testing around SERP features. They are adding new video carousels, playing with the length of the snippets and more. Much of this rich data is pulled via schema markup. If you are not using schema, you need to have a plan to put it into place!

The goal of this post was to give you a deeper insight into how search has changed over the years. This is, by no means, all the data around these updates, but I still believe there is much we can learn from what is documented. By understanding the shift in focus from Google over the years, we can make smarter choices about how to optimize our work. While 2018 is a little more than halfway over, I expect to see at least a few more major updates before the end of the year. Be prepared, learn from the past, and execute today to ensure that your brand and site are ahead of the curve.

How and Why to Delegate Marketing Tasks 16 SEO Interview Questions To Ask Before Hiring an Agency - [Infographic]